Onslaught vs Heating Up: A Love Story

Over the duration of the PCL19 spring phase, 3 of the 4 divisions have been controlled by their respective first seeds. Cyclone (Xbox EU), Flash Point (Ps4 EU), and Elevate (Xbox NA) have been indomitable – dropping 0 sets across the duration of the split thus far guaranteeing them MSI attendance. Meanwhile, in Ps4 NA, an intense rivalry has been stewing between first place contenders Onslaught & Heating Up. Through contentious best of five sets, and roster betrayals along the road – their battle to cement supremacy will conclude after week 13. In Ps4 NA alone, it is still mathematically possible to see either team secure first seed – but to achieve this, Os finds themselves sending their energy over to Lowkey Scheming to keep their MSI hopes alive.

Since the beginning of the PCL19 Spring Phase, Heating Up & Onslaught have been waging war to decide who wears the crown in Ps4 NA. Their first fated clash began during week 1, where Os managed to dismantle a slumbering HU squadron in a clean 3-1 victory. Shortly thereafter, in spite of such a decisive victory, Os Flex player ‘Im Calamity’ abandoned his roster in favour of joining the HU ranks. When questioned about his transition, Calamity cited his core reason as better chances of attending & performing at LAN in the long term.

With Calamity gone, Os sought to stitch the wound by experimenting with a number of roster adjustments. Going into their week 5 rematch against HU, Os’ most notable acquisition was slotting RitchyJBC into DPS. With their finalized roster consisting of TheOtherShutter, LilBigWyteBoi, TKOxGhost, RitchyJBC, & WhereDaGuap – Onslaught was greeted by fire & fury as an awakened Heating Up dished out an expedient 3 – 0 defeat. However, with the conclusion of Week 5, HU was dealt a massive blow as their star flex player in SirJamesParker was suspended due to behavioral issues. Just as quickly as HU established superiority, an essential component was effectively disabled. 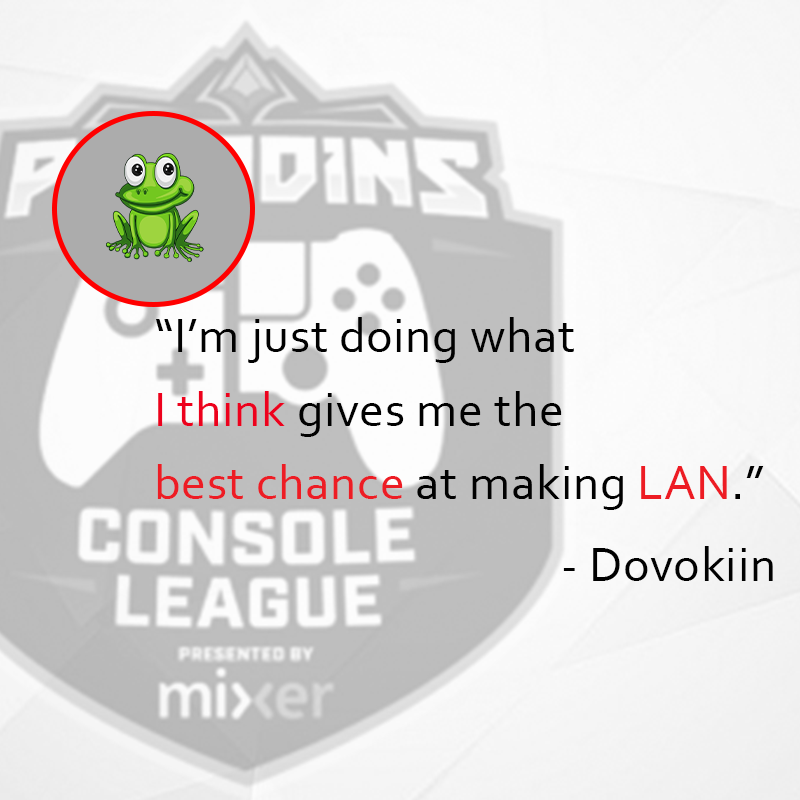 With this brief respite, an undeterred Onslaught roster continued to scrim throughout the bye week up until their 3rd skirmish with the HU boys. In an effort to resolve the gap left by SJP’s suspension, HU finalized a deal with FlashPoint (Ps4 EU) effectively loaning iGoodLad just in time to compete in week 7. While iGoodLad is a well-established figure, the series did not go as smoothly as either team may have hoped. Os opened up the set strong, stealing away 2 maps from HU. Normally this would place enormous pressure onto the team who fell behind, but instead, the veteran squad in HU altered their approach to the draft phase. Regardless of how valiant an effort from Os, their opponents managed to execute a full reverse sweep with the aid of picks like Koga & Viktor.

As a result of this contentious series stress testing the bonds of the Os roster, RitchyJBC decided to mirror Calamity – leaving to join the HU squadron. Onslaught was swift to locate a suitable DPS player of a similar tier by picking up FireryImpact – a player who has a powerful dynamic with rookie TKOxGhost. The resulting synergy & trust within the Os roster bolstered their performance against HU during their final confrontation on week 12. While this series went the distance, Os emerged victorious over their rivals taking the set 3 – 2 with the help of TKOxGhosts’ Androxus play.

Unfortunately for Os, HU remains in first place by a single game differential across the duration of the split. After adapting to sudden betrayals, and all their struggles across the spring phase – Os only have one pathway toward MSI, and it isn’t entirely in their own hands.

With only one week remaining for PCL19 spring phase, Os still have a chance to attend MSI but two conditions must be satisfied. Firstly, Ps4 NA’s 3rd place team in Low Key Scheming must do what they have yet to achieve by stealing two whole maps from Heating Up. Secondly, Os must utterly obliterate Big Money Esports when they face off during week 13. While the second condition is more likely to be met, the first can seem astronomical by comparison.

It’s worth noting that LKS have taken a map off of the current kings of Ps4 NA previously, be it with a slightly different roster composition. This serves to highlight the latent potential LKS is capable of channelling, as well as emphasizes the cracks in the surface when it comes to HU’s gameplay – something teams beneath them have taken advantage of before. While LKS is mathematically locked into third place regardless of the week 13 outcome – what better way to go out with a bang than denying HU both a first-place finish & MSI attendance?

What do you think about the Heating Up & Onslaught rivalry? Who would you rather see go to MSI and represent Ps4 NA? Feel free to let us know over on twitter ConsoleProNews.