April 5, 2019, Console Paladins lost one of it’s longest standing Superstars. OG Comedy has announced via his Twitter that he would be leaving Paladins as well as Itech. We have seen these tweets before from many other Players but something about this one makes it feel real. A good amount if not all of these Players making tweets like this in the past have all comeback or attempted to at some point. However, none were in the position Comedy was.

I have decided to quit paladins/competing. I don’t really have the time to play because I work and I don’t enjoy the game anymore as well I wish everyone in the league and the community the best. Good luck the all the the teams and ITECH

I have personally been a fan of his since his days with Blight, alongside the likes of Skeppii, Shoo, Soldierbot, and Woosh during the HRX Finals in January of 2018. He built and led a new Roster under the Onslaught banner to the Spring Masters in April of 2018 and even fought through the toughest of times with the Baldy Bunch in the 2018 Paladins Console League inaugural season. Comedy has a pretty long and vigorous career in Console Paladins. He didn’t start off as dominant as he is now however, he battled through tough times both in the beginning and towards the end of his Career. Starting with the VexX Gaming squad during the 2017 Console Wars never really able to find any ground in the huge open bracket week to week with the then powerhouses in Set to Destroy X and Strictly Business. Continuing to grind however he managed to find his way onto Blight once the switch to PS4 was made and ended up at HRX with the squad only to fall to the Console King Wxnderful and Elevate. After that loss, both Comedy and Woosh got hit with a ton of slack for being the main reason they went fell to the Xbox Champion. Woosh, however, rebounded at a faster pace even though Comedy made Spring Masters and Woosh didn’t. I believe it was due to a few reasons.

There was also the fact that Comedy and his Onslaught Roster had a ton of dramatic smog covering them with the entire Jordqqn woes, Akatsuki and his community involvement, and Ritchy with what people called the egomaniac. All these aside they proved to be the best PS4 NA Team at the time whether the other teams were strong or not, but ended up falling in the semifinals at LAN. They did end up losing to the Team that went on to win the entire event so that’s a plus, especially when Fable (Xbox NA) was heavily favoured with 79% of the poll’s votes across the field.

Comedy struggled afterwards, not able to find a team to compete with during Summer LAN he created his own, it didn’t do so well. Creating Baldy Bunch was a choice he made after going back to Xbox in preparation for the PCL. The first Console Paladins League with an actual Season and no monthly tournament. You had to qualify to get into the League, and Comedy’s team did rightfully. The team finished 1-5 and only winning 3 maps, 2 of which they happened to do against a depleted HappyBattleCats who after realizing their season was over didn’t care to finish as strong. A last-place finish in their Division, and using 11 total Players over the course of a 6 Week Season was more than demoralizing. Comedy along with numerous other Players swapped Roles constantly and struggled against teams like Team Cryptik (Curse These Hands) and the Summer LAN Champions, Onslaught. WarmUp from the PS4 NA side of the League used 10 Players, which made them the two teams with the most used Players League-wide. Some might frown upon this but in some cases, this was really good, they ran Academy type Rosters. Giving equal playtime to numerous Players to feel the real deal of the top tier play. Looking at the Baldyy Bunch Roster now- 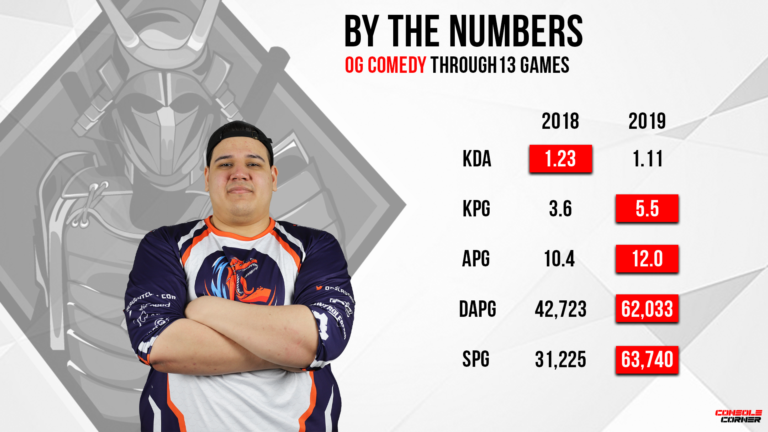 WarmUp has similar stories, however, the most notable being the success of TKOxGhost who is now apart of the Invictus squad leading the PS4 NA Division. Comedy I feel was abandoned by NA. A once dominant Player in the Scene going from a middle tier unknown, HRX Finalist, Team LEader during Spring Masters, to a Washed last place player, to a reformed PCL contender. It’s sad watching his story develope, but even worse when an ending like this happens. What’s next for Itech? Well they will be in search of a 5th Player now, whether they move SrBenji back to Frontline (Tank) and bring a DPS in or find another Flex to replace Comedy on the Off-Tank Role is still a mystery. You also need to consider if they will bring in a Rookie or an established Player. With Regions unlocked and a depleting Free Agency Pool only time will tell what their next move is. I personally enjoyed watching him play, both as an analyst and spectator. Comedy will forever be a friend to me, a Top Player, and I’ll always be a spectator of his. My only fear is that other’s won’t find anything he did enough to include him into the Console Paladins Hall of Fame. All of us at Console Corner want to thank Allan “OG Comedy” Mejia for everything he has done for the entire Console Paladins Community. We’d also like to congratulate him on all of his accomplishments during his Professional Console Paladins Career. If he decides to come back, we would welcome him with open arms and hope others do too. Until then, good luck with whatever it is you decide to do next and god bless.