Over the course of PCL19 Spring Phase, the trajectory of many teams was easily discernible – one team which deviated from the norm was Big Money Esports of Ps4 NA. With a PCL roster comprised of DehMuffinMan, NBKDsyr, K3vFalcon, xGlxy, and Ralkion – many familiar with the region could argue this lineup should’ve contended with Heating Up & Onslaught if they performed toward their skill ceiling. Unfortunately, we know now with the benefit of hindsight this team experienced numerous hardships, roster shuffles, and ultimately finished last place in their division – so, what went wrong?

Before qualifying phases for the PCL19 season would even begin, the Big Money Esports roster would look noticeably different from it’s PCL lineup. While early renditions of the team still included K3v & Glxy, it was also comprised of Bizness2110, Gepetto15, substitute RomanRulers, as well as team captain – BallinBerry. However, during their qualifying preparation, members of the team felt stagnation from their front line players based on scrimmage results. In order to reach ideal heights, the team opted to shift Bizness & Gepetto over to substitute roles while bringing aboard Ralkion & DehMuffinMan. Both Bizness & Gepetto departed shortly thereafter with ambitions of seeking out starting rosters.

Down two members, totalling only 6, many questions remained moving forward. How would the team delegate roles to a roster with 2 supports? Would DehMuffinMan meet his previous form or wither with rust? Will the team bump up RomanRulers to the main tank? After a brazen saga of trial and error, the roster solidified its members’ positions, we had: Ballinberry rising to the challenge of swapping to Main Tank; DehMuffinMan playing Off Tank; with K3v, Glxy, & Ralkion filling their traditional roles of Flex, Dps, & Support respectively. Big Money Esports signed up for week 1 qualifiers, not dropping a single game up until they faced off with an early rendition of the Onslaught team in the finals. Their 2nd place finish ensured them participation in week 4 of the qualifying process.

However, the burdens of adapting to a new position can be an arduous process – many on the team behind closed doors lacked confidence in Ballinberry’s transition. With the added prospect of NBKDsyr being a free agent, and historically skilled – some of the roster felt he might acclimate to an off role more smoothly. As such, with a majority vote, the mutiny was approved resulting in Ballinberry being ousted from his own team with NBKDsyr replacing him. Every roster adjustment to this point was to strengthen the odds that it would succeed. Ultimately, the team would comfortably sail through the qualification process and secure their PCL spot.

Going into PCL19 this roster seemed to be filled with regional talent, all with a number of accolades throughout their console career. K3vfalcon, an Xbox NA Flex veteran, has historically finished second place in a majority of LAN qualifying events. Ralkion, a seasoned Ps4 NA Support, had participated on a rendition of Invigorate that would beat the CoMa roster in early PCS events. Each of their starting roster has tasted multiple top 3 finishes across the pre-PCL era & thus brought a wealth of experience to the team. In an ideal world where skill was the sole factor for success – Big Money seemed poised to contest for regional dominance.

For the first 3 weeks of PCL19 the roster would remain intact, with the team’s only victory emerging from a narrow 3-2 over Lowkey Scheming. While their losses in weeks 2 & 3 were somber, they occurred to the inevitable top two for Ps4 NA (Heating Up & Onslaught). With the bulk of the Spring Phase remaining, a few hits should only serve as fodder to review & improve upon. Much to everyone’s surprise, DehMuffinMan & Ralkion both left the Big Money squad after week 3’s conclusion.

Despite failing to defeat their regional rivals before the pecking order was established, there were a few factors behind the scenes influencing team morale. Sources have revealed the swift departure culminated from a number of factors: Scheduling, Conflicting Motivations, and Ego. As far as motives go, there was a decisive split amongst players. Roughly half the roster wished to compete but not sink enormous levels of time citing low payout as an unfair exchange of effort. Meanwhile, the other members aimed for seats at the throne of Ps4 NA & consequent LAN attendance.

In conjunction with this, long-standing competitive players who have been on the cusp of greatness before carried chips on their shoulders. Game perception and an unwillingness to find middle ground became primary culprits within the team, no greater friction than between DehMuffinMan & K3vfalcon. While not volatile in nature, the disagreements between these players made for a tumultuous relationship, proving coordination was a little too difficult to maintain.

Normally teams could resolve internal strife given time, but some members on the roster couldn’t get on until 8:30 pm, while others couldn’t stay on past 10:30 pm. This put the strained roster in a unique position, where time could not be allocated to adequate enough levels to practice let alone conflict resolution. When combined, these factors were catalyst enough to fracture the very first Big Money Esports Squad.

Entering week 4, Big Money Esports remedied their roster woes by promoting RomanRulers to Main Tank, shifting NBKDsyr to Off-Tank, and reacquiring Gepetto15 to fill the Support position. For a period, there was a honeymoon phase with this new line up. Feeling reinvigorated, the Big Money lineup scrimmed often to largely positive results according to sources. With eyes on the prize, they accepted their week 4 defeat to eventual LAN representatives Heating Up, solely focused on correcting perceivable errors in their play.

To bolster their efforts, they brought on So12rovv week 6 as a coach, who had recently departed from the Onslaught team. So12rovv is a tank specialist who’s finished 3rd at DreamHack Valencia and boasts top 3 finishes locally all throughout the pre-PCL era. With his expertise alongside his exposure to high levels of play, this additional perspective should theoretically fortify Big Money’s performance. However, scrimmage results started to decline in part to rival teams exploiting the offlane. Player accounts have largely placed fault in NBKDsyr for transitioning poorly into the Off Tank role and refusing options the team provided him to aid in his performance or reignite his passion.

Regardless of So12rovv’s best efforts, it became evident the Big Money team wasn’t wholly invested in coaching. Players like Roman & Gepetto actively sought out the assistance, whereas NBK expressed disinterest on the whole for the game – lacking in motivation. As time advanced, team captain K3vFalcon would also feel more detached from Paladins Game as well as the competitive scene.

The Falcon Soars No More

Since week 4’s roster change, Big Money Esports hadn’t won a single set, not even to Lowkey Scheming who they contested the very first week of the Spring Phase. Along this timeline, the MSI announcement was made from Skillshot where console players were dealt a devastating truth – prizing available to console players had been significantly impacted based on the structure of the crossplay LAN event. Bearing the weight of his longtime Esport being gutted, alongside personal emergencies – K3vfalcon’s motivations tanked drastically.

With each day leading up to week 10, scrimmages were attempted but they continuously fell through. Player accounts of the situation outline how members of the team wouldn’t relay their availability to scrim, at times going missing altogether. Considering the dedication demonstrated by the newer players to their ranks, this behavior was unacceptable. Eventually, a boiling point was reached between Gepetto and team captain K3vfalcon. As a consequence of this confrontation, K3v kicked Gepetto from the team and in a gesture of solidarity – RomanRulers & So12rovv had both left as well.

Despite claims that NBKDsyr was not adequately adapting, sources also expressed displeasure regarding K3v’s leadership. Over the span of weeks leading into week 10, a number of solutions were posted by teammates to grant K3v a leave of absence while enabling the team to practice regularly. The suggestions ranged from: utilizing subs so K3v could take time off; role swapping with NBK to reignite his passion, or even allowing K3v to step down completely. All of these options could make scrimming far more regular and remedy some performance issues immediately. Seeing as how none were implemented, it’s fair to say K3v did not approve of them. 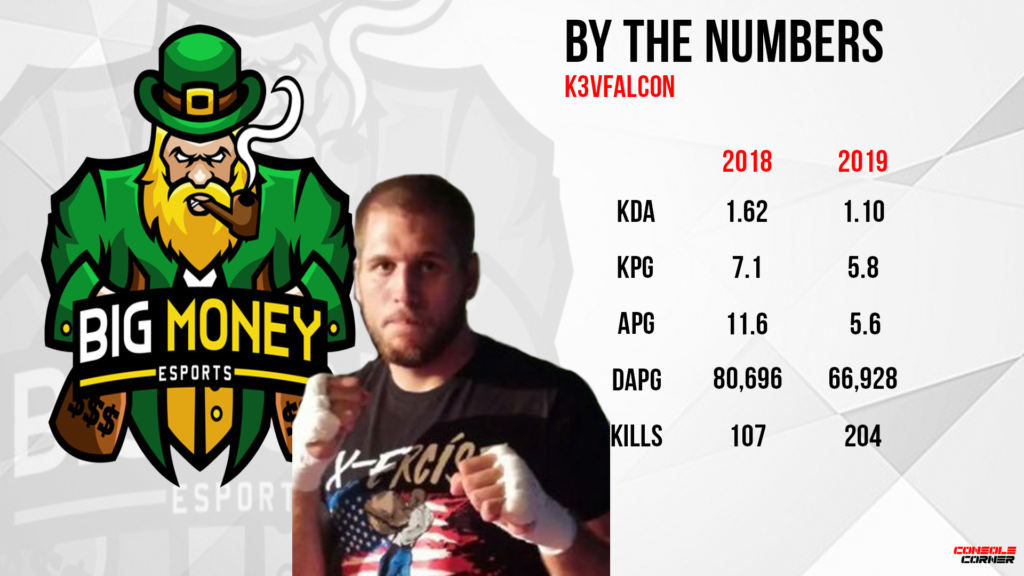 Going into week 11, we saw Izymitchell & MostSalty step in to complete the 5 man roster – but by this point, it was too late. The same issues regarding scrimmages, player motivations, and actively grinding the game persisted for some members. After week 13 concluded, Big Money Esports racked up a few accolades but they were far from achievements, ending the split with: the worst match score tying with Xbox Eu’s Team Viral at 1-11; the second highest negative game differential with minus 32; while NBKDsyr & K3vfalcon finished the league in the top 15 for most deaths. An overall unimpressive split for a roster that could boast about its talent upon entry.

K3vfalcon flys off the team & NBK expresses little desire to return himself.

Money Where Your Mouth Is

With Spring Phase at its end, the silver lining on that dim horizon is relegations for Big Money Esports. Retaining Izymitchell, xGlxy, and MostSalty – the Big Money squad is actively seeking to solidify their starting roster moving into June 15th for relegations, aiming to bounce back into the PCL. With sights aimed at the Fall Phase, a chance at redemption lurks in the near future.